Last Saturday was over 100° F outside, fortunately I spent the day in Monterey playing airsoft not far from the ocean, so I only experienced high 70’s. That Sunday (the 24th) however, was in the high 80’s, and I spent wrenching on the Morgan.

I was pleasantly surprised to find all the bolts for the rear suspension mounts to be almost able to be turned by hand. Contrary to my experiences with the Barracuda, nothing has seized up over the years. My father attributes this to the fact that “all English cars are self-lubricated during operation.” I got the rear axle, leaf springs, and rebound spring assemblies off the chassis, and stored them back in the tent. It was late enough at that point that I called it quits.

This weekend, it was in the high 80’s to 90’s on Saturday, so again I decided it’d be good to work on the Mog. I, by my father’s suggestion, unbolted the bell housing from the back of the engine, and that proved to be a mistake. When I went to try and lift the engine, the bell hosing and transmission were too heavy to lift free. So, I just kept lifting the engine. The engine mount rubber was so dry and rotted that they just fell apart (unnerving, as that was all that had been holding the engine in place for several months). Then, my troubles started.

I had a metal cart that I was going to lower and strap down the engine to, and one of the wheels collapsed… which caused the engine, transmission still attached, to topple over. This resulted in breaking the distributor and spilling a good deal of oil out the oil fill cap (that I spent Sunday cleaning up). After much pulling and cursing, I wrenched free the transmission, put that on a separate wooden cart, and then kludged together a setup to hold the engine upright on a wooden cart with a large plastic tub strapped to it. I unfortunately do not have any photos of the chassis with the engine out, I was too wiped out and dinner was getting cold when I rolled all that back into the tent.

I was considering trying to get the remainder of the front end off the chassis this Sunday, but between the heat, being sore as all hell (I’m all kinds of broken as of late), and one of my puppies hurting their leg and needing attention, I spent Sunday just relaxing and recouping.

Might spend some of the Fourth on the car if it’s not too hot out. 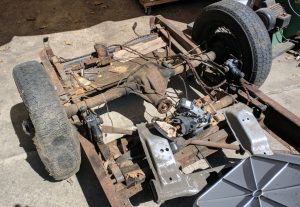 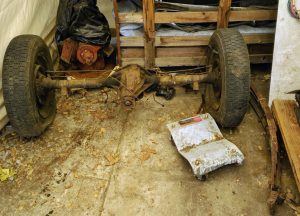 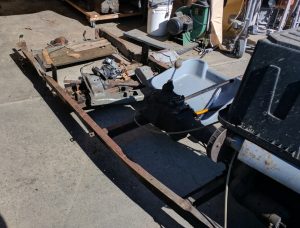 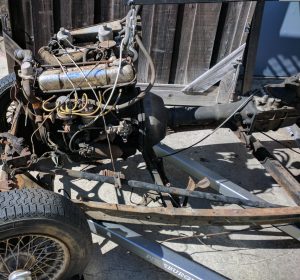 Oh, also, I’ve been restoring a Boyle-Dayton gas pump that I acquired from my neighbors. It’s back together enough that we’ve got it in a temporary spot out front of the garage until we make a more permanent fixture to mount it on.

Also-also, the Airstream – coworkers have helped remove all the exterior paint, and while attempts to polish have failed, we did get the whole exterior sanded to a uniform finish with some ~350 grit sandpaper. Currently looking into ways to get a proper polish on it, and will return to fixing up the interior again soon.

This entry was posted in 1966 Morgan +4, 1972 Airstream Ambassador, General, Other Cars, Restoration. Bookmark the permalink.