No, we’re not addicted to Corvettes, why do you ask?

If the title doesn’t drop a hint, I don’t know what will.

My father just decided to sell off his 2006 Cadillac XLR and buy a 2002 Corvette automatic convertible. It’s got only 12k miles on it, everything’s like new, it’s got a nice aftermarket exhaust, and I’m going to town on the ‘upgrades’ and minor fixes. I’ll be chipping in on paying for the car since I’ll be likely driving it more than he will, and buying the upgrades (sound insulation, upgrade modules, etc) will fall on me. The car will be replacing my Stingray as the commute vehicle, so that one’s earned a ‘garage queen’ status after over 24k miles in less than two years.

I have to say, it’s awesome to have C5 Corvette in the house again, feels like ‘being home again’ for driving a car. 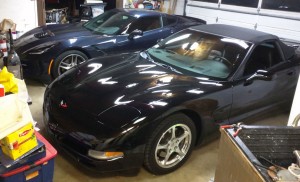 This entry was posted in 2002 Corvette. Bookmark the permalink.