So I picked up a 1972 Airstream Ambassador today. Scored it for only $800 from the tow yard a friend of mine works at. I’ll post up about it on here on occasion, since it will become another one of my project vehicles. The link here and on the “outside connections” page goes to the AirForums thread I started about it. Essentially it’s a 29′ long rolling hotel. It’s dirty as heck right now since the previous owners’ last hurrah with it was to take it to Burning Man 2014, but it should clean up well.

Part of why this is being shared here is that the long term plans are, should I decide after a couple years of trying out travel trailering that I enjoy it, I will gut / modernize the trailer to some extent and get my own tow vehicle (instead of using my parents’ Avalance). That tow vehicle would have to be something that can both haul the trailer and carry the Morgan on its back as well. The idea is, haul the two to some nice place (like Napa) for a ‘long weekend’ and go cruising with the Morgan instead of the tow vehicle.

As for the Morgan, currently a lot of the bigger remodeling projects around the house are either winding down or past major hurdles, so soon I should be able to really start working on that again. As it is, I will soon (possibly this weekend) be going through the huge pile of Solstice parts I’ve been holding on to for no reason and getting rid of them. Once I manage to sort out the clutch issue on the ’86 Corvette, I will be able to move the Barracuda on top of the car lift and put the Morgan and Solstice chassis in the garage for measuring and designing of the new MogRod chassis. (huzzah!) 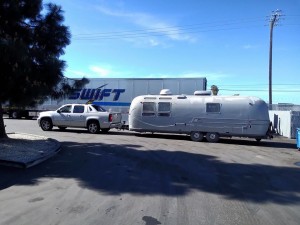 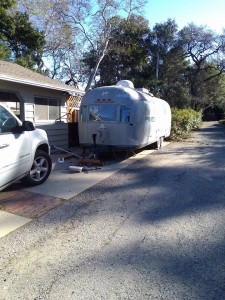 This entry was posted in 1966 Morgan +4, 1972 Airstream Ambassador. Bookmark the permalink.

2 Responses to Airstreaming It